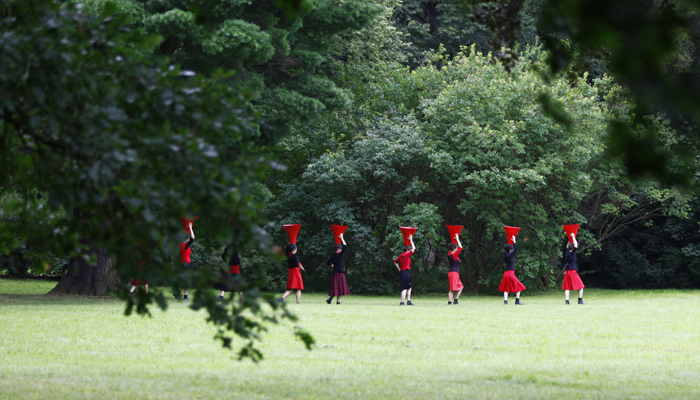 Kind : : theater, music and singing
Duration : 55′
Audience : all age and international audiences
Created in 2009, will continue to be on tour in France and in Europe. In 2016, Les Clandestines will create a new version of the show, with new songs, new images and sounds, and new costumes. Mathieu Goust, a percussionist and drum player who plays in Boots and Roots (created in 2015 by Les Clandestines), will join the group.

Songs in Italian or in various dialects, coming from different regions of Italy… Love songs, work songs, songs of exile and resistance… This show is a tribute to the popular culture stemming from the every day life of many past generations.

The project is essentially to bring folk singing into public spaces and to bring the audience to wander with the singers through outdoor locations, whether natural of urban (the streets of a city, gardens, etc.).
Each performance is an occasion to invent a new route, to explore new places and underline their specificities.

Les Clandestines enjoy exploring the confrontation between elements of a contemporary musical language (new arrangements, elements of improvisa¬tion) and tradition (arrangements for two or three voices, based on simple harmonies ; instruments such as guitar and percussions, that are often present in traditional accompaniments).

The songs will be performed in Italian and in dialect. Thanks to the movements and expressions of the actresses, any audience from any country is able to understand the themes of some of the songs. Nonetheless, the power of the show relies not so much on
the exact content of each song as on the expressive force of the repertoire. The show is thus perfectly suited to international audiences.

The artists and the public wander in the streets together. The singers create their own space as they go along, according to the surroundings and the way the audience wishes to follow. Their way of relating to the spectators is simple and direct. The powerful involvement of the bodies in the act of singing induces a special emotional response from the public.
All this creates among the audience and the artists a particular feeling of togetherness and sharing.

Tuesday 26 january 2016 • 3pm
> Messe Freiburg (Germany) • Trade Fair for Stage Productions, Music and Events
In preview : excerpts of the new version
The show is nominated in the category STREET
The messe Freiburg : The website

PERFORMANCES
Büro Azad Production will be there to greet you stand 2.7.16 from the 26th to the 28th of January.

Consult the calendars : Of the website the Clandestines and that of the office
Please contact us if you wish to associate with one of our tour partners.