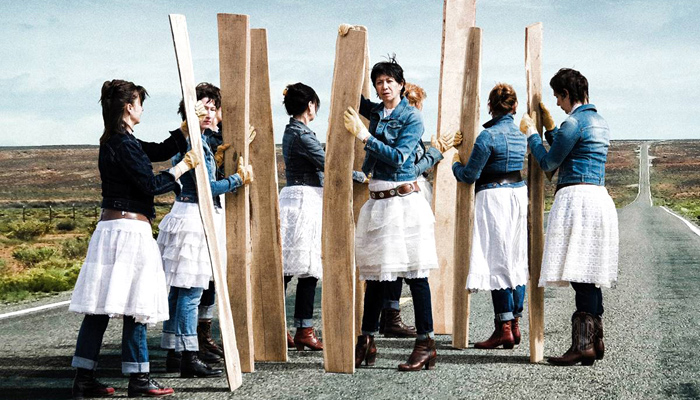 Boots and Roots • An outdoor show based on American folk songs

Les Clandestines are exploring the roots of Northern American music, particularly in the South East of the United States, from Virginia to Tennessee, from Kentucky to Georgia, from the Appalachian Mountains to the Delta of the Mississippi…

Their voices are backed up by the rough energy of the guitar and the drums. They create the sounds of a world being built.
Amid a pandemonium of wood and metal, they hurriedly build gang planks, temporary shelters, façades and railroad tracks.
Their powerful songs tell the story of wide open spaces and of those that strode upon them in search of a new life in the New World. They use Walt Whitman’s words to praise Nature and the space that mankind has conquered. Their show is an invitation to rediscover a repertoire that has greatly influenced our own musical history.

Folk music in the United States results from the crossing of all the different traditions brought by the migrants from Europe, the slaves coming from Africa, as well as Indian influences.
Negro spirituals, work songs, blues, old[time music, country and Western music, Cajun music and Tejano music among others are all a part of what has recently been described as American roots music.

Les Clandestines are a group of 9 female singers. Singing songs that are mainly meant to be sung by men.
They use several languages: English, French, the English of the Afro-American slaves… Words of the Native Americans are also used.
Solos alternate with moments when several voices sing together.
The songs that have been chosen are essentially composed of monody, or simple polyphonic phrases. Les Clandestines have enriched the songs with their own polyphonic writing and arrangements.
Calls and responses. Lullabies. Poems, stories and texts…
The 9 singers evoke, through the variety of their interpretation, the hardships, the struggles and the joys of the people for whom singing was a way of enduring everyday life.

Les Clandestines recreate the shrieks, tinkles, shots, thuds and rumbles of a country under construction. The floor under their feet is made of wood.
Their jumping, hammering and dancing create noises and sounds that Whitman evokes in “Leaves of Grass”, when he writes that he hears “America singing”.
The sounds are created by the bodies of the actors, their boots and hammers, as well as by the instruments: percussions and guitars.

Folk songs belong to the people. They belong to each individual, as a part of his personal and intimate history. They are also a strong social bond. Folk songs, in a sense, reach their full expressive power in the streets, where everybody can hear them.
There, in the streets, is an urge to tell of the world.

Consult the calendars : Off the website The Clandestines and that of the office
Please contact us if you wish to associate with one of our tour partners.